Home » Blog » Commercial » The Evolution of Lawn Mowers Throughout History

The Evolution of Lawn Mowers Throughout History 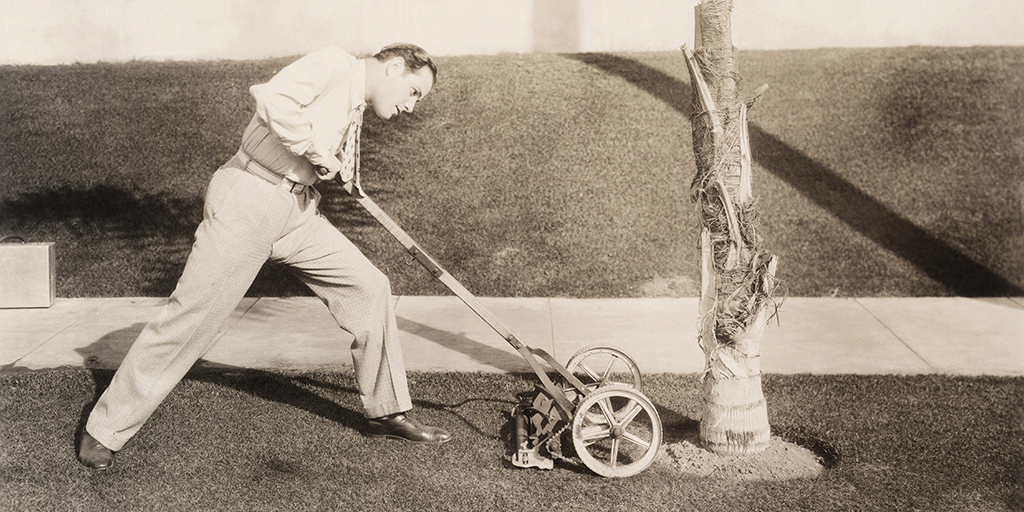 Today’s selection of lawn mowers can be overwhelming. From large riding mowers and tractors to small push-behind and remote-controlled mowers, there’s an option for everyone. Although advancements in mowing technology have allowed us to mow with less work and in less time, we didn’t always have it so easy. The history of the lawn mower is a story of innovation and adaptation, and it certainly shows how far we’ve come in terms of mowing technology.

The first lawn mower and what followed

The first mowing machine was patented in 1830 by Edwin Budding. Budding got the idea for the lawnmower after seeing a machine in a local cloth mill. The machine he saw was one used to shear the nap of velvet, and the English engineer thought it wasn’t too dissimilar to the grass he loathed to cut with a scythe.

Budding developed a cylinder, or reel-type, mower that featured a series of blades arranged around a cylinder. It required the user to push the machine across the lawn, which was much less work than swinging a scythe weekly. In fact, Budding’s classic reel mower design is still around today in many home improvement stores across the United States.

In 1859, Thomas Green was responsible for creating the first chain-driven mower. Now, this was a big deal because a chain drive meant a lighter machine, further reducing the amount of effort it took to cut your lawn. Green’s first machine was called the Silens Messor (silent running); and though the design would change over the years, the principles it was based upon remained the foundation for Thomas Green’s business until production ended in 1935.

America saw its first reel-type spiral-bladed cutter in 1868 when Connecticut manufacturer, Amariah Hills, was awarded the first U.S. patent for the machine. Just two years later in 1870, Elwood McGuire, a Richmond, Indiana native, designed a machine that essentially delivered push mowing to the masses. The lighter, simpler machine was a huge hit.

By 1885, America was manufacturing about 50,000 lawnmowers per year and was shipping them all over the world. The simpler hand-push reel mowers were mass-produced from 1918 to 1925, making yardwork a bit more manageable for the working masses, especially in light of the economic depression that befell the U.S. during that time.

Of course, even these mowers were eventually considered too much work, and curious minds began working on a way to put more power behind the mower to reduce the effort required to mow. One such mind was Colonel Edwin George, a U.S. military man. The colonel was the first to manufacture gasoline-powered mowers in the States. Unfortunately, due to economic circumstances (WWII), the mower wasn’t readily available to residential users due to costs. Once the war ended, however, the power mower was showing up in neighborhoods across the country.

Knud and Oscar Jacobsen introduced a mower with a purpose-built gas engine in 1921, which made it possible to cut an entire 4 acres in just a day. This machine was geared towards commercial use, such as in cemeteries and golf courses. Naturally, others continued to improve and tweak the existing machine designs. In 1929, William Beazley developed a power rotary lawnmower equipped with blades that were driven horizontal to the grass (as opposed to perpendicular like other popular reel mowers). This created an incredibly close cut that began to show people just how precise mowers could be.

1938 saw Toro — yes, that Toro — produce the first power mower intended for the homeowner. With its affordable cost, ease of use, and ability to be stored in the garage, residential users finally had a machine that was so easy to use that parents began making their kids mow the grass with it!

Mowing technology reached a crucial point in history in 1948 when Max Swisher of Warrensberg, Missouri invented the first commercially available zero-turn mower. Not only could you ride the “Ride King,” but it made mowing a more productive and efficient task. With zero-turn technology, all you had to do was adjust the wheel 180 degrees to reverse course, eliminating the effort of starting new lines or navigating around obstacles. This design inspired others until Hesston wound up with a design patent based off of principals found in Swisher’s and another’s mower, allowing them to become the first company to offer zero-turn mowers. Hesston eventually became Excel Industries, the parent company of Hustler Turf, and appropriately enough, their zero-turn mower was called “the Hustler.”

Briggs & Stratton, another well-known name in the industry, was responsible for creating a lightweight aluminum engine for mowers in 1953. By 1957, the engine would account for 80 percent of the engines shipped by the company across the United States.

With the development of new and innovative technologies, new safety standards had to be implemented. In 1982, lawnmower safety standards were created and designed to ensure future machines were regulated and safe for users—both commercial and residential.

At this point, the mowers available were easier to use and offered people something they could use to cut lawns quicker and with greater ease. And what’s easier to use than robotic mowers? That’s right. By the year 2000, two different companies debuted their very own robotic mowers — a design that was later adopted and improved by companies like Spider, the creators of the remote-controlled Spider Mower.

Even more stringent standards were enforced on mowers, and in 2008, mowers were being heavily regulated for their EPA emissions. These regulations paved the way for mowers that were 95 percent cleaner than those that came only 15 years prior.

And here we are today…

We find ourselves in a world where there are countless options for both commercial and residential users. Finally, homeowners could tackle their lawns with the same precision and ease without breaking the bank; and landscaping professionals have adopted newer and smarter technology that allows them to cut huge swathes of land in record time.

The history of the mower is long and full of ingenuity, and many of the foundational principals are still in use today — improved for the end-consumer through rigorous quality assurance, safety standards, and industry regulations. Today, almost anyone can complete their lawn work comfortably. And isn’t that the point of technology, to make our lives easier? If you’re still dreading the “chore” of mowing then consider upgrading. Chances are there’s a model out their perfect for your needs — you only need to shop for it!